a soundtrack for the end of mankind 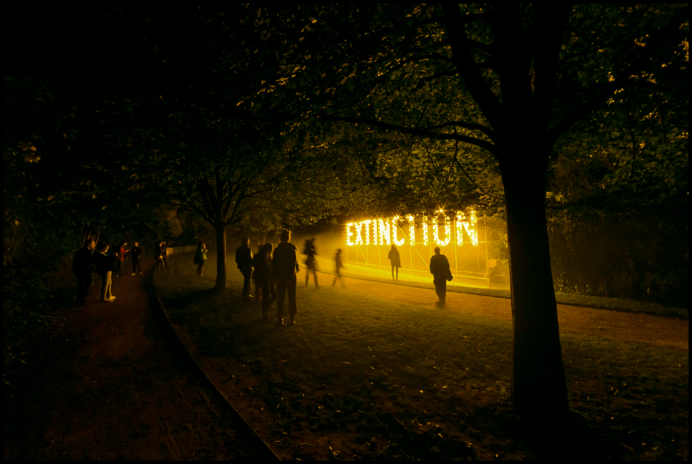 a soundtrack composed for the Nuit Blanche 2015 in Paris, commissioned by the architecture agency Encore Heureux, about the end of humanity
composing
sound design
programming

the project went in three directions, as i was curious about the different ways mankind will disappear. the first one was, as he would put it, not with a bang, but a whimper. samples of the appollo rockets taking off, of the electromagnetic field of jupiter, and of construction workers on morgan ave compose a low, persistent foundation on which hopeful, high-pitched tones oscillate for a while, before being drowned in industrial, mechanical, destructive noises.

the second part, then, was about the replacement of organic life by machine life. starting with a bustling, repeating melody with each note slightly off-beat, the first part focuses on the human quality of music (hard to recreate on software). the sound of the piano is slowly replaced by simpler, 'purer' sounds of sine wave oscillators, more precise, more on-beat, perhaps more beautiful but definitely less human.

finally, the last part was looking away from "how did it happen?" to "how did we let it happen?". and i stumbled upon a weird piece on the internet archive (which i can't find anymore) and i wanted to try sonic collages. the end result is a sort of hivemind of post-1950s recorded media, from worst to best.

the visuals on the website below were really just an exercise of style in writing a generative tryptich in javascript.

www
the mayor of paris tweeted about it
video documentation