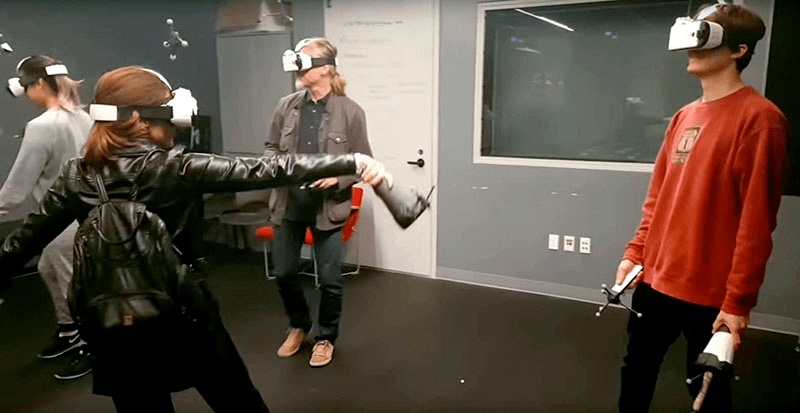 dia de los holos was a specific iteration of the Holojam, a shared virtual reality experience developed/hacked by the Media Research Lab at NYU and produced by Ken Perlin. it allows friends to share the same space, in real and virtual life. and also draw in 3d.
programming
interaction design

the intent was to use virtual reality not in any commercial or gimmicky way, but to focus on human to human interactions, and to see how that would become in virtual reality. by combining motion capture, gear vr and wiimotes, we provided the audience with the opportunity to share a virtual space, floating in a parade of fantastical skeletons in a colorful world of the dead. tracking both the vr headsets and the wiimotes through motion capture technology, we managed to recreate anthropomorphic avatars in virtual space. people could interact with each other within that world, and that transformed a bleak, grey room in downtown brooklyn into a fantastical space where even moving around became a unique experience. my main contribution to that project was mostly in terms of interaction design and programming, focusing on how to detecte certain gestures and how to trigger certain events based on these gestures. i'm currently working on more developed versions of this holojam , most notably with the vive and neuron controllers.