The first part looks at protests as a historical phenomenon, and attempts to highlight features that seem to form the common basis of successful political protests. The second part focuses on today's use of software for protest, while the third part looks at potential avenues for how software could be used in the future.

The State of Online Political Action 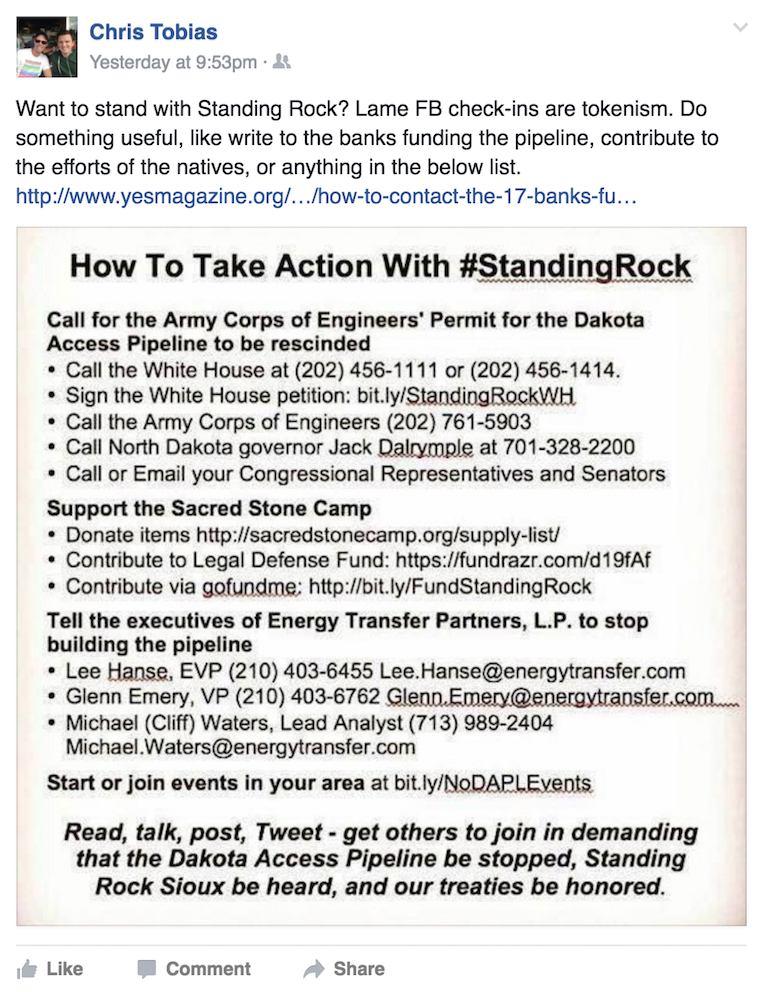 This seems to be the face of mainstream political protest in 2016.

Following a viral trend of checking-in at the Standing Rock Reservation on Facebook, there has been a swarm of posts debunking this social media strategy to protest the Dakota Access Pipeline. These post offer a more efficient alternative -calling the people in charge. However, this contact information is displayed as a static image, probably in order to play into Facebook's ranking algorithm and reach more individuals while, at the same time, prevent those same people from easily contacting these numbers (no link to click on, no number to copy and paste).

We carry devices in our pockets that could calculate trajectories to Mars, and this is what we come up with when it comes to standing up for each other. Static images.

An earlier example of this was the parallel development of #OpIcarus, the Anonymous attack which targeted central banks world-wide, including the Bank of England, Banque de France, Bank of Monaco, the UAE, etc. and Nuit Debout, a “real-life” protest movement that involved real people gathering on a physical square. One news outlet reported that an e-mail outage caused by #OpIcarus lasting less than fifteen minutes was equivalent to a loss of 200,000 GBP. but the real amount was not disclosed -which means that they were losses because, when they don’t have losses, they usually disclose that information. However, to give you an idea, the payment system for the Bank of England crashed for one day in October 2014 and it stalled 22 billion GBP worth of payments -that’s the scale of how much wealth is handled on digital networks.

In the meantime, Nuit Debout was a protest movement which fought specifically against a specific law that was to be passed and would make the french workers’ situations more precarious in terms of social guarantees. It started around March 2016. and ended up being a bunch of people coming together to protest a bunch of things.

By the end of July, Nuit Debout didn’t have any immediate impact. The law was passed, undemocratically, without being approved by government. Protesters and protestees alike started enjoying their summers. #OpIcarus, on the other side, had a clear impact: they wanted to punish the banks and they made them lose money.

Still, tere was a long term effect of Nuit Debout. As they occupied the front page of national and international news outlets, they opened up the need for a dialogue in the public sphere. There were people in the streets, people that could be interviewed, people that could be related to, and could open up a discourse. However, nothing changed on the legal side of things. There was physical presence, a physical contestation, but no concrete result. In the case of Nuit Debout, nobody did anything, and when August came, everyone went on holidays.

#OpIcarus harmed their enemies. There was some sort of hierarchichal organization with defined goals. There was a manifesto, and there was coordination in action -everyone participating was supposed to come online at a specific time. What #OpIcarus wasn’t though, is good PR material. A teenage movement with V for Vendetta masks and dubious visual charts, it kept on using military rhetoric to describe its actions and using pseudonyms to describe each other. There was no way anyone could easily relate to that phenomenon and it became very easy for the media to either not cover it at all, or cover it as something that only concerned the banks and their attackers -in sub-sections of page 12 and specialized press.

One was politically legitimate (getting permits everyday to gather on the square) and technically inefficient, while the other one was politically illegitimate (only reported in the economics section of newspapers, instead of politics section, or in alternative news sites related to hackers), but had some concrete, measurable repercussion.

There is a discrepancy between what we want to do -protest for political change- and how we do it -march in the streets, sharing content on social media. Like everything else in a leftist political movement in 2016, comes down to taking a hard look at what works and what doesn't. Spoiler: a lot of it doesn't work.

Disclaimer: I am not a techno-messianist. Right now, network technologies are a the equivalent of a super-drug for political activism. We get online, we retweet, we spread the word, but we don’t seem to realize that being mildly scandalized by the live murder of an innocent by a police officer on social media has nothing to do with political protest, it’s just a real-life version of a black mirror episode.

The most important thing today is still to vote. If there is one thing that Brexit and Trump have taught us, it’s that institutional elites cannot overturn an election, at least not easily. If you get out and vote, you can make the biggest change.

But elections only happen years apart, so we still need some political action in between when we still want to contribute to the political steering of our countries.